Penn State's $3.28 billion capital plan focuses on the renewal of existing facilities and systems. The plan provides strategic investments in new construction, plans for and provides for much needed facility renewal of an aging physical plant and provides for replacement of obsolete enterprise information technology systems.

Penn State's Five-Year Capital Plan for fiscal years 2014 through 2018 focuses on the renewal of existing buildings.

Penn State’s $3.28 billion capital plan focuses on the renewal of existing facilities and systems. The plan provides strategic investments in new construction, plans for and provides for much needed facility renewal of an aging physical plant and provides for replacement of obsolete enterprise information technology systems.

Over the course of two years, Penn State’s Board of Trustees have appointed designers and approved construction for many of the projects in the plan, and there have been a number of changes.

The total cost for the proposed plan has increased by $540 million since 2013. The total plan at that time envisioned spending $2.74 billion. The majority of the plan was focused on capital renewal of existing facilities, and this focus continues. Penn State has a large inventory of aging, un-renovated space that is costly, difficult to maintain and is an impediment to student learning and faculty research.

PLEASE NOTE, although specific projects are listed in the Capital Plan, their inclusion does not guarantee Board of Trustee approval. Individual projects are normally presented to the Board twice, and the Board appoints the designer, approves final plans and authorizes expenditures of funds for construction unless it is a state-funded project. Some project proposals rely on as-yet unsubstantiated gift funding and possibly unsubstantiated additional state allocation. 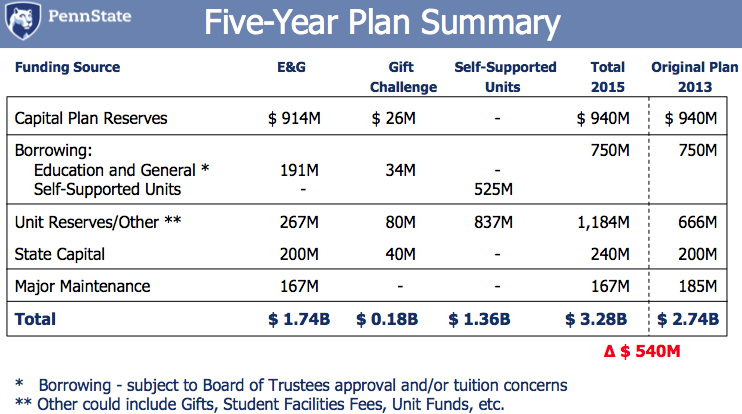 The capital budget provides funding for facility, capital equipment and information technology investments. It is completely separate from the University’s operating budget, which pays for the day-to-day operating costs of the University as it conducts its mission of teaching, research and outreach.

The current capital plan will be funded by money from many sources. Over the past several years, the University has accrued operational reserves through careful management. These reserves will be deployed to support pressing renewal needs. Some projects will be funded with borrowing and the debt service coming from operational revenues or tuition. Self-supporting units such as the Hershey Medical Center generate operating reserves that are set aside for the capital investments. Other sources include state funding, philanthropy, student facility fees, unit fees and major maintenance funds.

The University is authorized to issue $750 million in debt. The plan includes $225 million for Education & General projects and $525 million for self-supporting unit projects. The University’s credit rating is Aa2 by Moody’s and AA by Standard and Poor’s. Both ratings reflect a very high quality credit profile. The University commissioned two independent debt capacity studies to confirm that the debt level was prudent. Their analysis advised Penn State that the capital plan borrowing is well thought out and within judicious levels. Overall debt service is projected to stay slightly below 2 percent of operating expenses and is considered to be a conservative level by all measures. 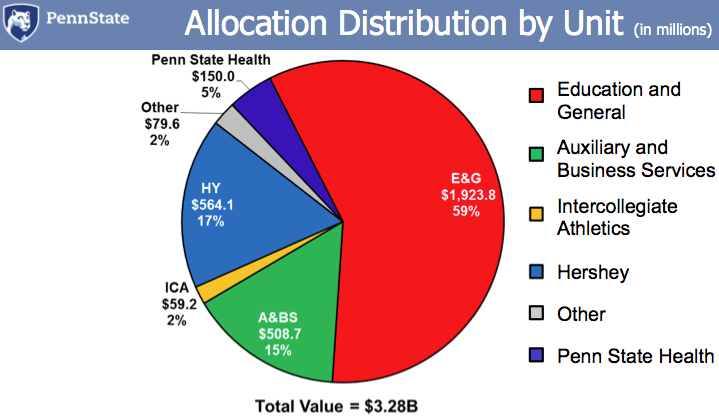 At University Park, 65 percent of buildings are more than 25 years old and have had no significant renovations. Many buildings' systems are beyond their useful life, and the buildings are not suited to 21st-century teaching or research. “This plan for the long-term protection of our physical assets is an investment in our future,” said Ford Stryker, chief facilities officer. “These improved facilities will better serve the teaching and research missions of the University and strengthen Penn State for years to come.” While almost all the projects are to replace existing inadequate facilities, there is some allocation for new construction. Most of the new construction will be to replace existing obsolete facilities and for housing in strategic campus locations.

Immediate renovations at University Park include the renewal of multiple undergraduate laboratories and residence halls as well as key campus infrastructure, such as the water treatment plant and chilled water distribution. Projects also include upgrades to health and safety, mechanical systems, roofing and fire and life safety systems. 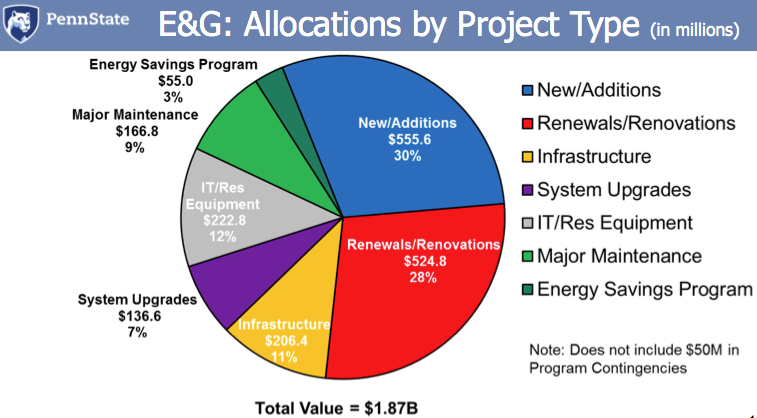 Penn State operates campuses across the state, so renewal allocations are being balanced to appropriately address the needs of each location. Campus buildings will receive upgrades to their security/access controls, HVAC systems, roofing and wireless infrastructure. Aging infrastructure such as roads and utility systems will be covered as well. 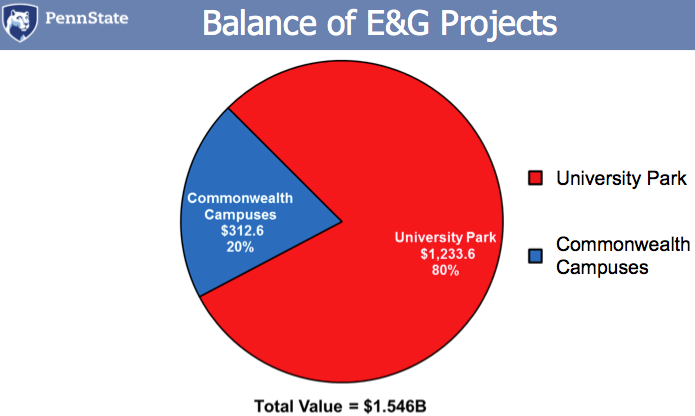 The balance of projects for self-supporting units is similar to those for E&G, with renewals/renovations and major maintenance comprising 67 percent and new construction projected at 14 percent. 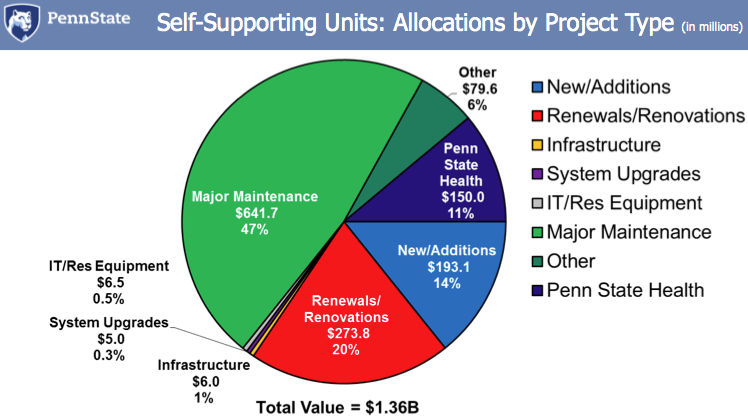