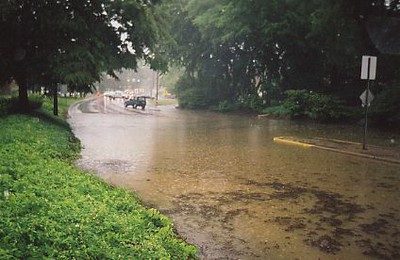 The University has joined forces with the Pennsylvania Department of Environmental Protection (DEP) to improve the quality of stormwater run-off from Penn State property. The DEP is requiring all designated communities and other entities, such as Penn State who operate separate storm water systems, to implement storm water management programs. All members of the Penn State community can help with these stormwater improvement efforts. If faculty, staff, and students can learn to make some small behavioral changes, their individual actions can have a positive effect on the water quality of our watershed.

Stormwater is precipitation that flows across the ground and pavement. The precipitation can be in the form of rain, or snow and ice that melts and drains into what are called storm sewers. These are the drains normally seen at street corners and low spots all over campus. They are connected to a series of underground pipes that outlet to local streams. It becomes a problem when the stormwater picks up debris, chemicals, dirt, and other pollutants as it flows across pavement or erodes stream banks. Sometimes pollution is not picked up by stormwater run off, but enters storm drains where people dump pollution such as antifreeze, motor oil, carpet cleaning liquid, or paint into storm drains. These are called illicit discharges and can be simply eliminated by choosing proper disposal techniques.

Eleven of Penn State's 24 campuses are located in areas that have been designated as "municipal separate storm sewer systems," also known as MS4s, by the US Environmental Protection Agency. The locations include Abington, Behrend, Delaware, Harrisburg, Hershey, University Park, York, Altoona, Hazelton, Shenango and Worthington.

In addition, the partnership works with the local conservation group ClearWater Conservancy.